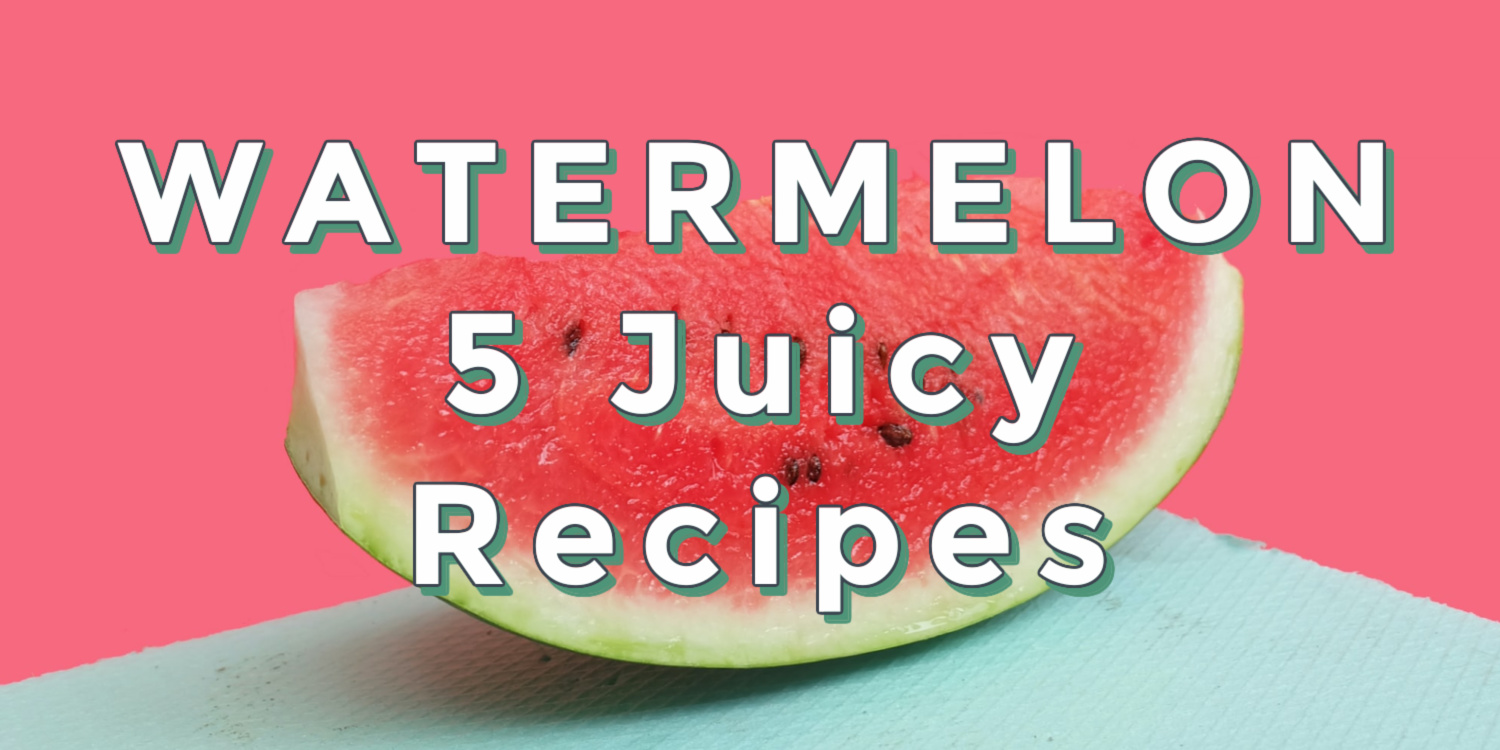 Nothing tastes like summer more than watermelon. It’s the fruit with fun built right in – I mean, who doesn’t need a little target practice? Ptooey!!! You can eat this juicy, red fruit on its own (maybe a tiny sprinkling of salt) or turn it into delicious watermelon recipes.

If fun and deliciousness doesn’t do it for you, how about some health benefits?

Watermelon is 92% water and contains few calories. Plus, it has many vitamins, including antioxidants and vitamin C.

The best way to choose a ripe, flavorful watermelon is by looking for melons that are symmetrical, with green leafy vines and a rind that has a greenish-yellow tint. Store them on the countertop for two days after you buy them; refrigerating them too early can cause the flesh to oxidize and turn brown.

Now, how about some recipes?

Slice watermelon into 1-inch thick rounds. Cut each slice in half to make 2 semicircle shapes. Place a lime on top of the remove slice place it to create a smiley face. Top with fresh mint leaves and freeze until solid, about 4 hours or overnight.

These sweet juicy treats will help cool down your summer cocktails! Freeze pieces of seedless watermelon until they are mushy (about 3 days). Take them out of the freezer and let them thaw for 10 minutes. Press the fruit through a fine mesh strainer to collect juice. Pour the thick liquid into ice cube trays and cover with plastic wrap. Freeze for at least 4 hours or until solid.

Sure watermelon is good with lime and lemon, but what about tequila? If you’re willing to experiment this summer, whip up a watermelon cocktail. Here’s one recipe that sounds pretty tasty:

A dash of Triple Sec (Optional)

Ice cubes! Lots and lots of Ice! Good thing watermelons make a lot of juice. You will need enough to fill the blender.

Blend all ingredients together in a blender until smooth. Serve and enjoy!

Here’s another beverage recipe that uses watermelon to compliment its companion liquor. Try out this martini recipe.

1 Shot of Vodka (or liquor of your choice)

Fill a shaker with ice cubes, vodka and watermelon puree. Shake vigorously for 30 seconds then strain into a martini glass garnished with lemon twist or watermelon slice.

1. Place cubed watermelon in blender and blend until smooth.

3. In a bowl, beat cream cheese and sugar with an electric mixer until fluffy.

6. Fill popsicle molds and freeze for at least 8 hours

Use popsicle or ice pop molds instead of a container to make sweet pops! You can use any kind you want, but we like these from Amazon.com because they are easy to pop those pops out without breaking them. (Affiliate link there, folks… you won’t pay a penny more, but your purchase will help us get closer to buying the land for the Idyllwild Woods Retreat Center.)

A Slice of Trivia for You

Watermelon was thought to be introduced in North America by the Spanish during the exploration and conquest of the New World. But some evidence indicates that it might have been discovered in the Caribbean islands or Central America before its introduction to United States colonies. Christopher Columbus brought seeds to Hispaniola from Spain in 1494 and later Francisco de Carvajal brought them to Mexico. Over the years, it has been bred into many varieties for various purposes, including seedless fruits and ones used for cut flowers.

Though it remains unknown exactly when they were first domesticated, and by whom, they date back to the 6th century B.C., according to archaeological records from Mesopotamia. The Egyptians ruled over watermelon production nearly 4 millennia ago in the 10th Egypt dynasty when much of their food was produced locally. It is not clear how these ancient societies discovered this divinely sweet treat but we do know that the Greeks had an appreciation for this ambrosial fruit because Homer’s Odyssey mentions Zeus blessing Argos with “wide-reaching pastures full of sheep and cattle; and there are tilled fields producing barley and wheat and vines, with their tall growing melons, pumpkins and cucumbers.”

Watermelon in My Laborrrratory This Weekend

I’ll be making watermelon syrup. If you want to watch what may turn out to be SPECTACULAR (or a disaster to rival Julia Childs’ finest moments), catch us on Facebook and Instagram LIVE at 11:00 Central. And assuming I don’t blow the house up, I’ll put the recording here.

Also, as always, if you want to join the Idyllwild Woods First-Tasters club, we’d love to have you. These brave folks are the first to try any concoctions I make as prototypes. (The syrup won’t be one, because it’s got to be refrigerated immediately.) I send them out for free… just pay shipping. Sign up here.